The Story of Tea: India

As does Japanese, Indian legend also attributes the origins of tea to Bodhidharma, an Indian monk who lived around the sixth century who was in a seven-year long sleepless meditation contemplating the perfection of Buddha.  While in the Japanese tale the Bodhidharma accidentally fell asleep, and when he awoke he was so angry with himself that he cut off his eyelids and where his eyelids fell two tea plants grew.  The Indian version recounts the monk plucking and eating tea leaves from the ground, which helped him to stay awake.

In 1834 the English East India Company appointed a committee to formulate a plan for the cultivation of tea in India.  This came after tentative British efforts to grow tea following the discovery of indigenous tea plants in Assam in 1823.  The north-east Indian tea industry was gradually established during the late 1830s and 1840s, success being achieved through the joint cultivation of imported Chinese bushes and native Assamese stock.

China, the birthplace of tea, has always been a major consumer of the beverage.  In India, on the other hand, it has only been since the early twentieth century, long after the country became a major tea growing region, that tea drinking has become popular.

Most tea in India is made by adding tea leaves and a combination of various spices to a mixture of milk and water boiling in a metal pot or kettle.  The most common spices used are cardamom, cinnamon, ginger, cloves, and pepper.  Sugar is added either to the boiling mixture or to individual servings of tea.  Tea prepared in this way is known as chai. 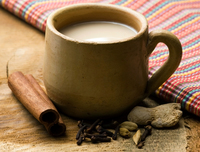