The Story of Tea: Tibet

According to Chinese Tang dynasty (618-906) records, tea was known about in Tibet by at least the end of the eighth century.  However, it was not until the Song dynasty (960-1279) that tea started to be consumed in significant quantities. Since Tibet’s climate is hostile to the cultivation of the tea bush, all the very substantial amount of tea drunk in Tibet had to be transported by porters and then yak caravan from where it was grown in Sichuan Province.  The journey was long and arduous, and in order for the tea not to spoil or be otherwise damaged along the way, it was pressed into bricks and, for the journey through Tibet, wrapped in yak skins.  Yak caravans continued to carry brick tea into Tibet well into the twentieth century.

Brick tea made of black tea has been the norm in most parts of Tibet.  The ability of brick tea being sewn into yak skins to withstand knocks, rain and other conditions unfavorable to the transport of loose-leaf tea through a long and arduous journey from China into Tibet made it the logical choice. The universality of brick tea in the Tibetan world led to its use as a form of currency.  Tea could be bartered against practically anything, and workmen and servants were routinely paid in it. From the late eleventh to early fifteenth century tea was bartered by the Chinese government in Sichuan Province for fine Tibetan war horses. 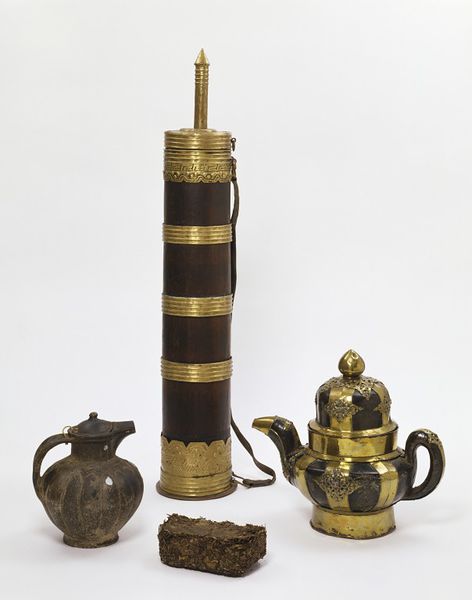 Although tea came to be drunk throughout Tibet, the Tibetans modified what they borrowed, as with other key imports from China, transforming it into something distinctively their own.  “Butter tea” is quintessentially a Tibetan invention.  To make butter tea, a tea brick is crushed or pounded into powder and put into a pan of cold water.  This is heated and boiled for about five minutes, a small amount of soda, obtained from the shores of the lakes on the northern Tibetan plateau, being added to give a reddish tinge and to draw out the flavor.  After boiling, the tea is poured through a strainer, traditionally made of brass or horsehair but sometimes today made of plastic, into a long cylindrical wooden container known as a cha dong.  Butter and salt are added and the mixture is vigorously churned with a long plunger until it is thoroughly emulsified.

A lady in the Yunnan Province of China making Tibetan butter tea - photo from the American Museum of Natural History, New York