Different teas accompanied by different kinds of dessert made from glutinous rice.

Just because pleasure and non-essential trips are now bad ideas, it doesn't mean that we can't experience other cultures from the comfort of our own home! This month in "Tea Bits", we take a look at Korean Tea Service. What’s so unique about Korean tea sets? What are some of the yummy Korean tea snacks? Oh, and so many different kinds of herbal infusions!

Here is a photo of a complete Korean tea set and how each item is placed for a Korean tea ceremony. 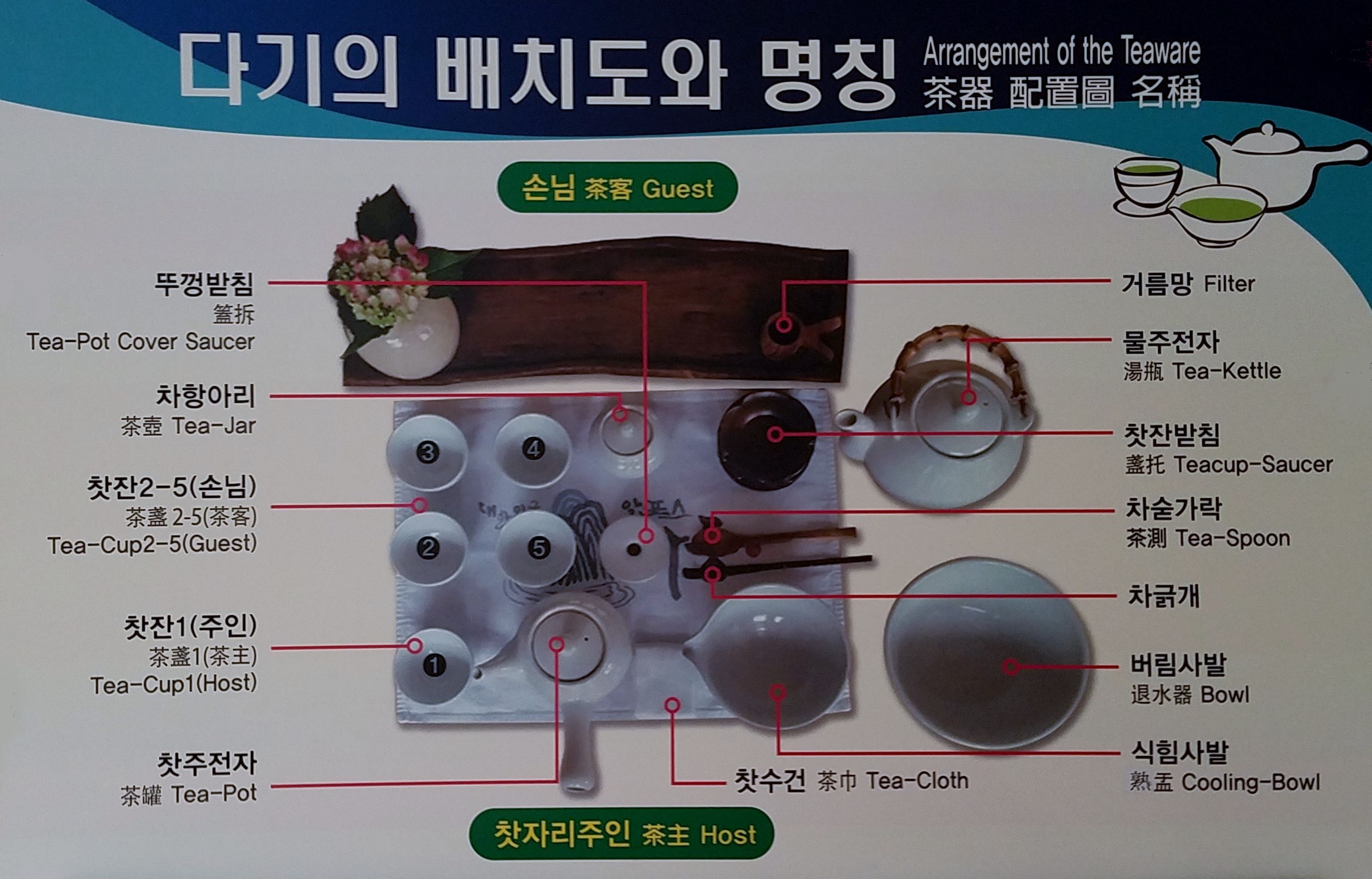 Though Korean teaware can be made in various materials, very often you will find them made of ceramics. Citing from a blog on the Victoria and Albert Museum website, “In Korea, contemporary ceramic art practice can be roughly divided into three different approaches. First of all, there are artists who adhere to tradition, preserving the cultural heritage of the nation. Secondly there are those who pursue innovation, seeking artistic originality and individual expression. The third trend bridges these two by reinterpreting tradition with creative experiments.” 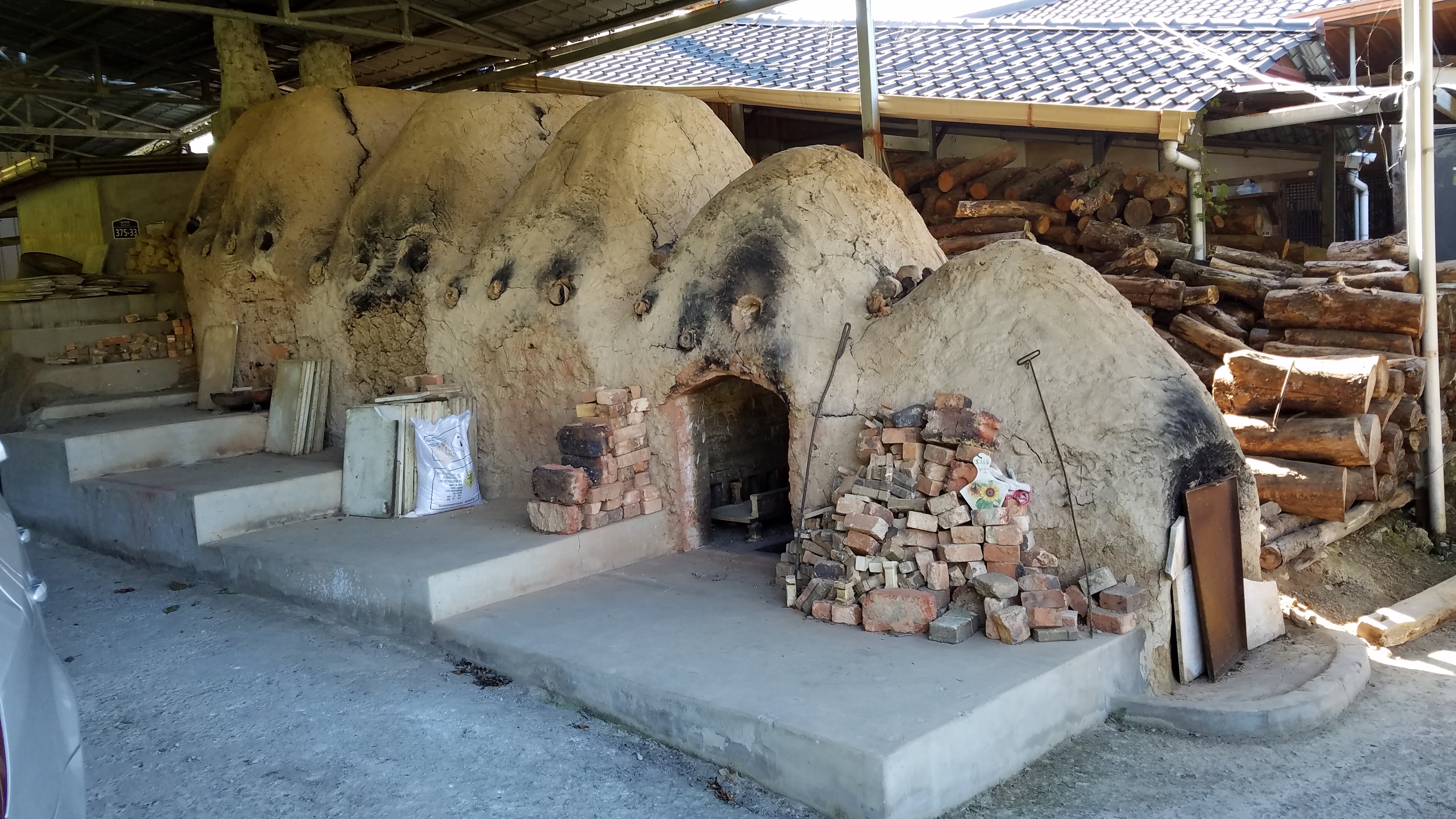 Kilns outside the studio of a revered South Korean ceramic artist who is reputed for his mastery of the “Boseong Deombeongyi” technique. 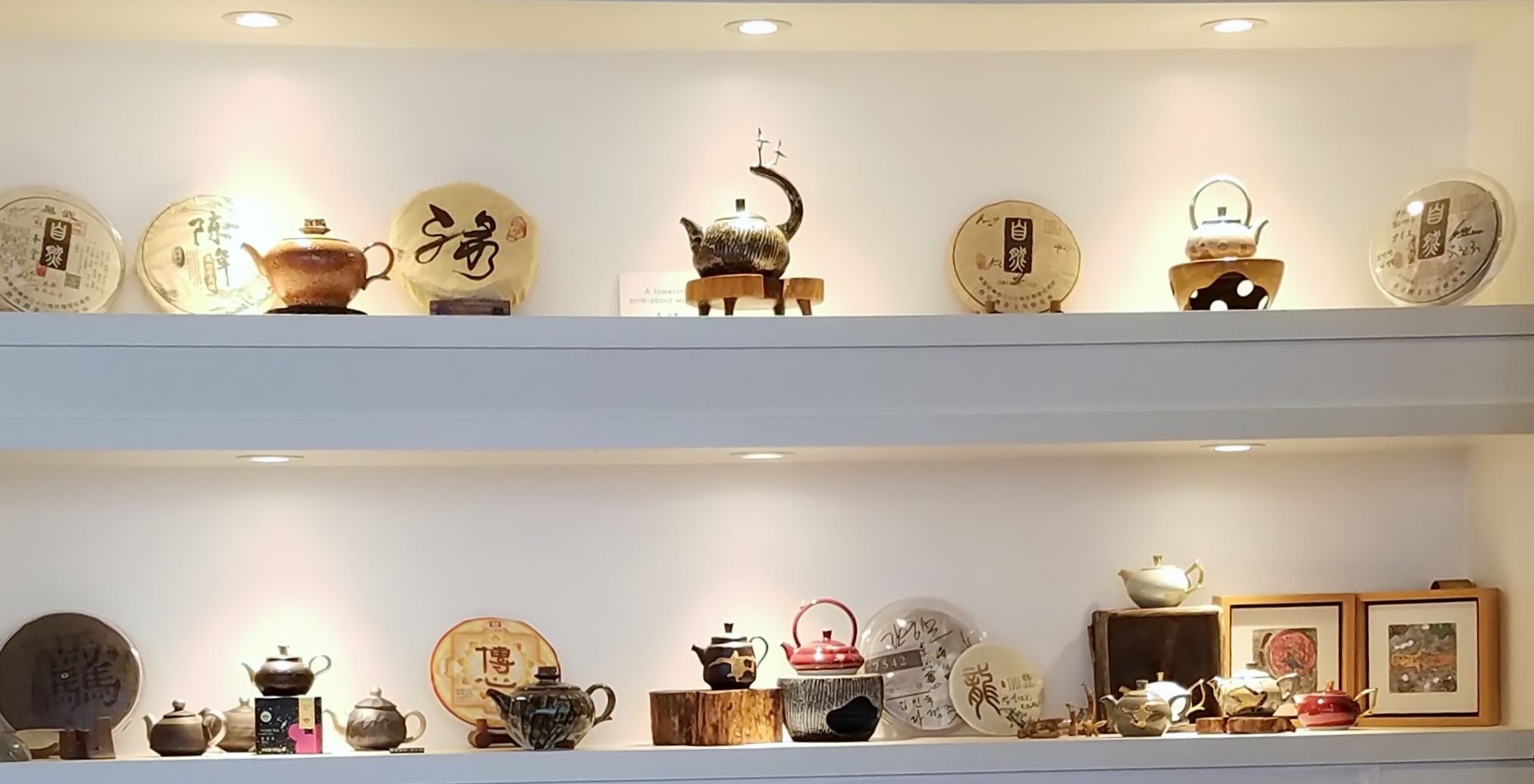 Beautiful teapots by a Boseong potter who likes to reinterpret tradition.

Korean culture emphasizes its desire to be in harmony with nature instead of trying to control or overpower it. This philosophy is reflected in many aspects of the Korean life, such as in its cuisine. I was impressed by the many beautiful and tasty tea snacks offered, most handmade from scratch with natural, and often, seasonal ingredients. 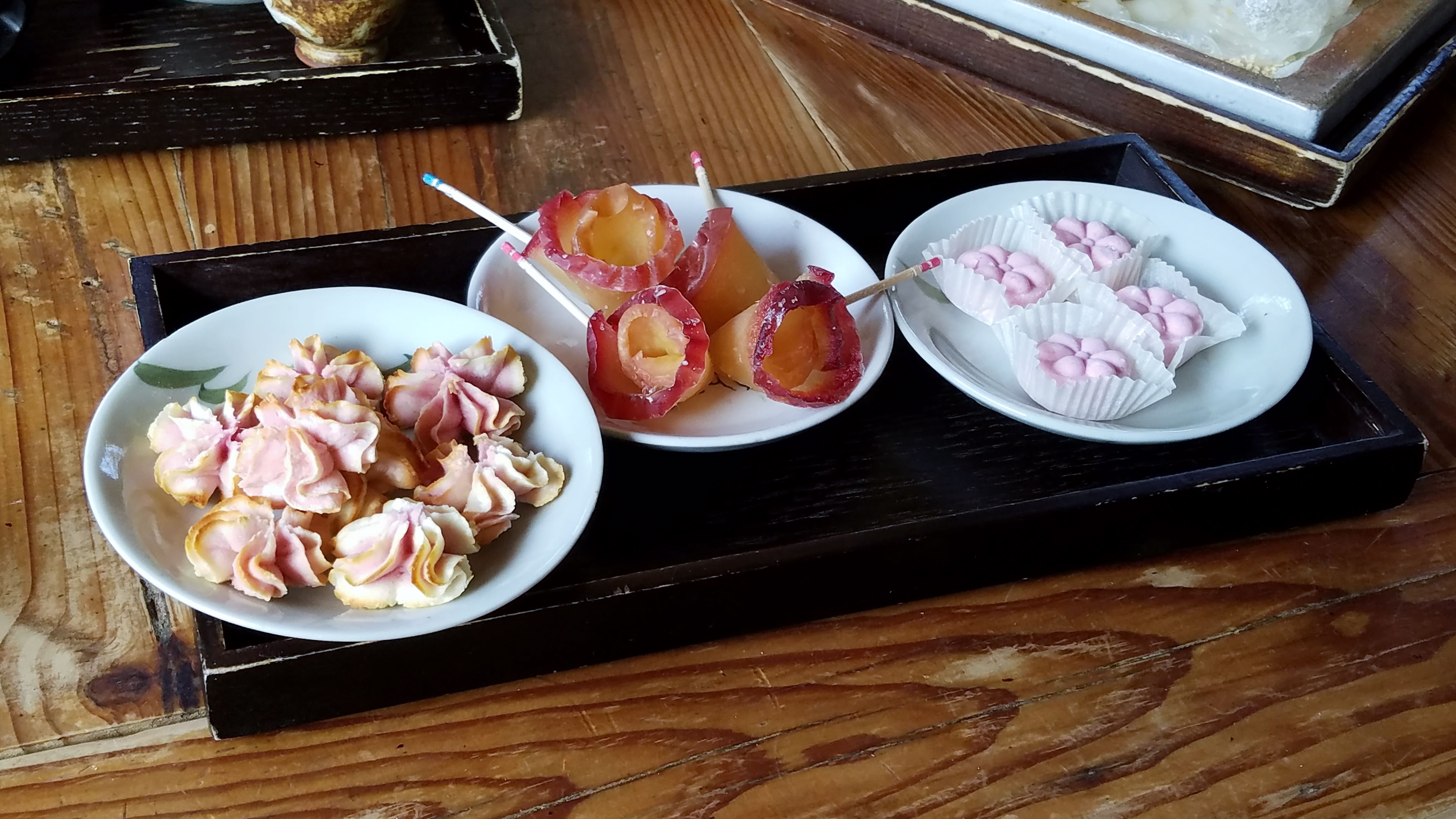 When I was in South Korea in the fall during the persimmon season, persimmon fruits were everywhere hanging from persimmon trees—on the streets, in people’s yards, on persimmon farms, on the mountains…I mean EVERYwhere! Alongside people were drying their persimmon fruits by making “persimmon garlands” and hanging them outdoor to dry naturally. What beautiful sights! I happen to love persimmons. I tried all the persimmon snacks that were offered to me and I loved them all! 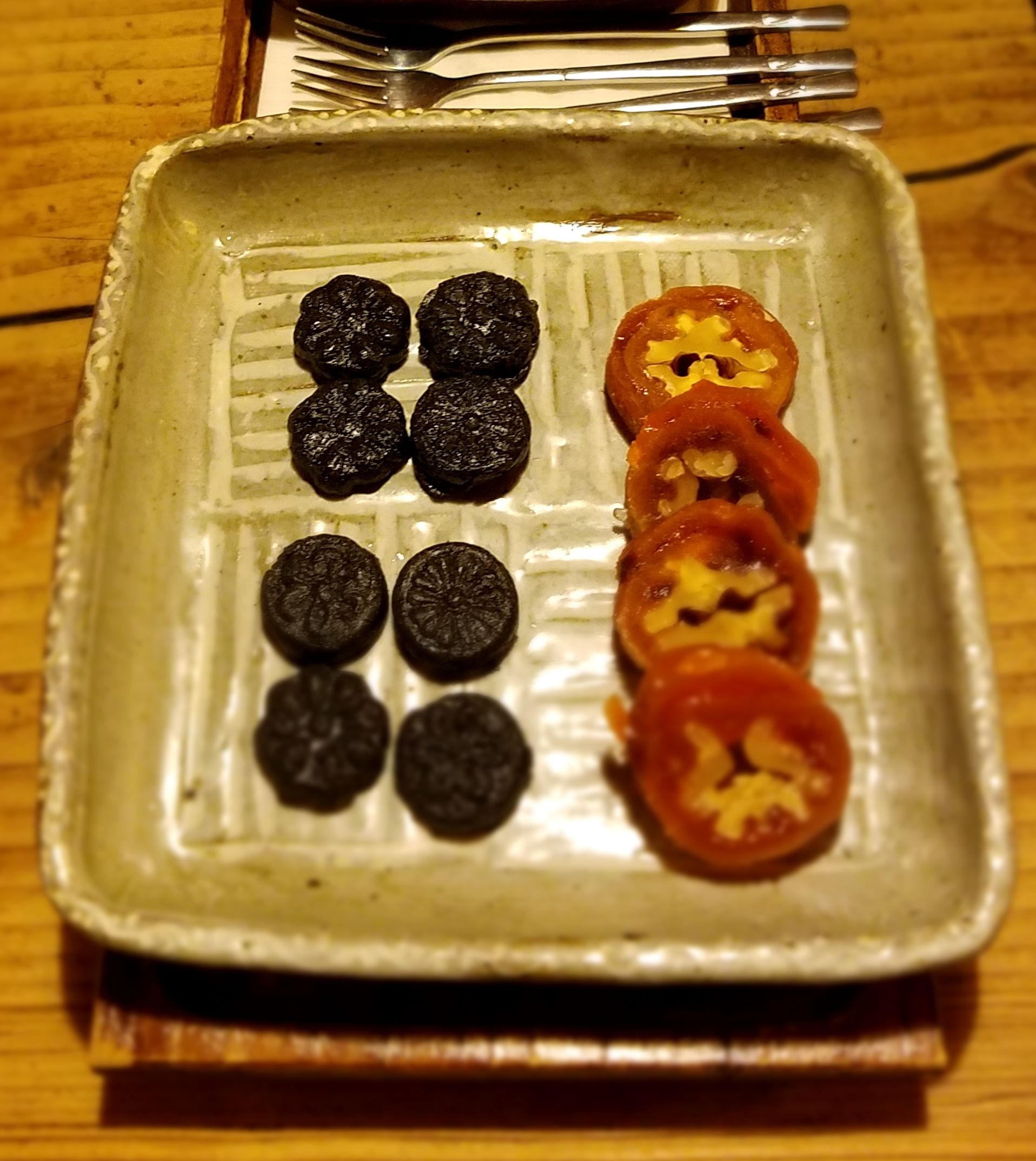 The selection of Korean herbal infusions also reflects the culture’s human-nature in harmony concept. How our bodies and nature are connected. There is much healing and nurturing power in natural ingredients. In Korea, a popular over-the-counter medicine against the common cold is a herbal tea called “Ssanghwa-tang” or "Ssanghwa-cha." Ssanghwa-tang, consists of different medicinal herbs, with a deep brown color and a slightly bitter taste, is also known to be used to treat someone who has depleted the healthy qi or when recovering from serious illness because of its restorative property. 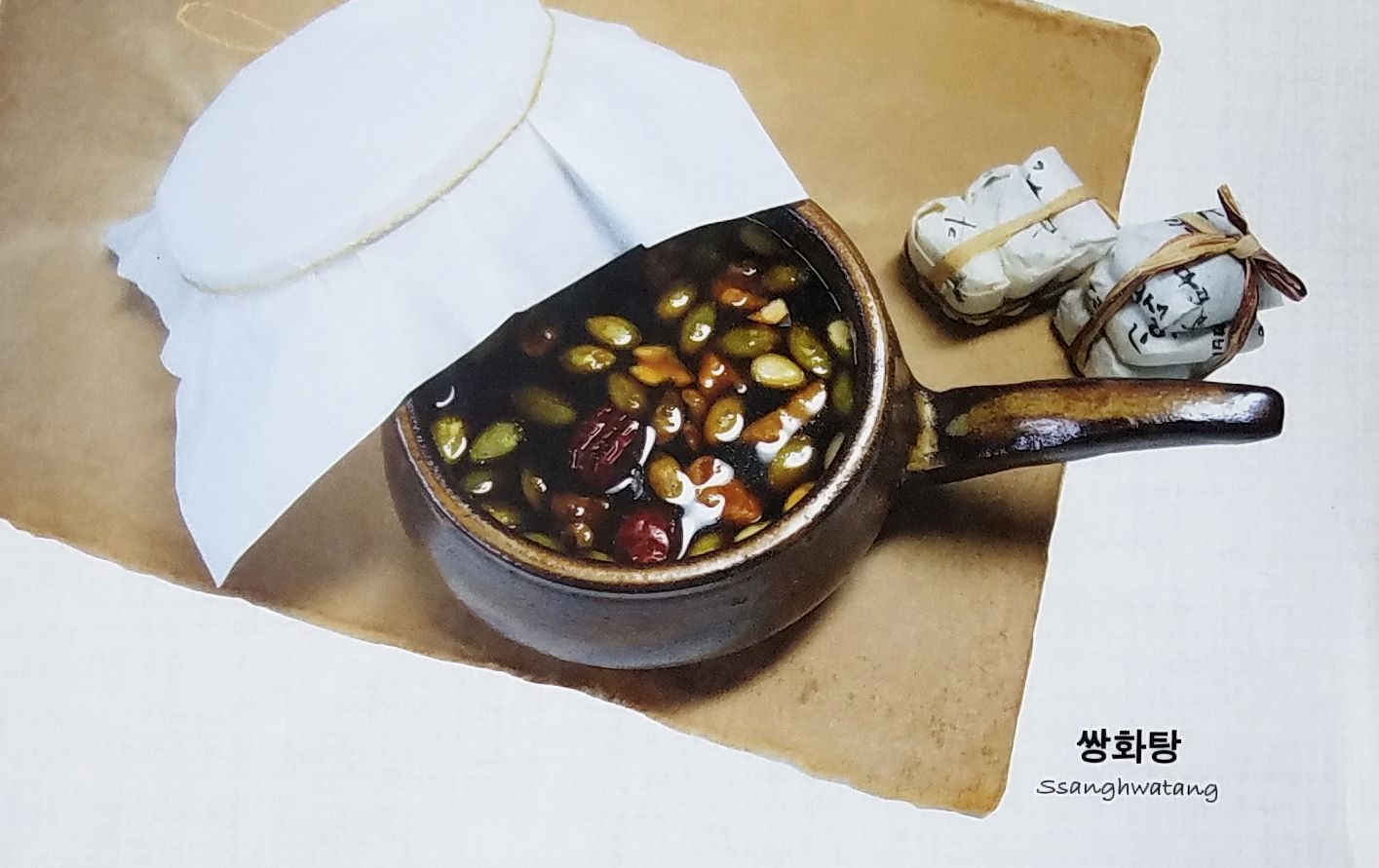 One of my favorites, Sujeonggwa (Korean Cinnamon Ginger Punch) with dried persimmon is simply a fabulous dessert drink. It was typically served from late fall when persimmons were in season until end of winter (end of February in lunar calendar). The earliest origins of this Cinnamon Ginger Punch go back to the 18th century, but the use of cinnamon and persimmons seem to have happened much later, around 19th century. 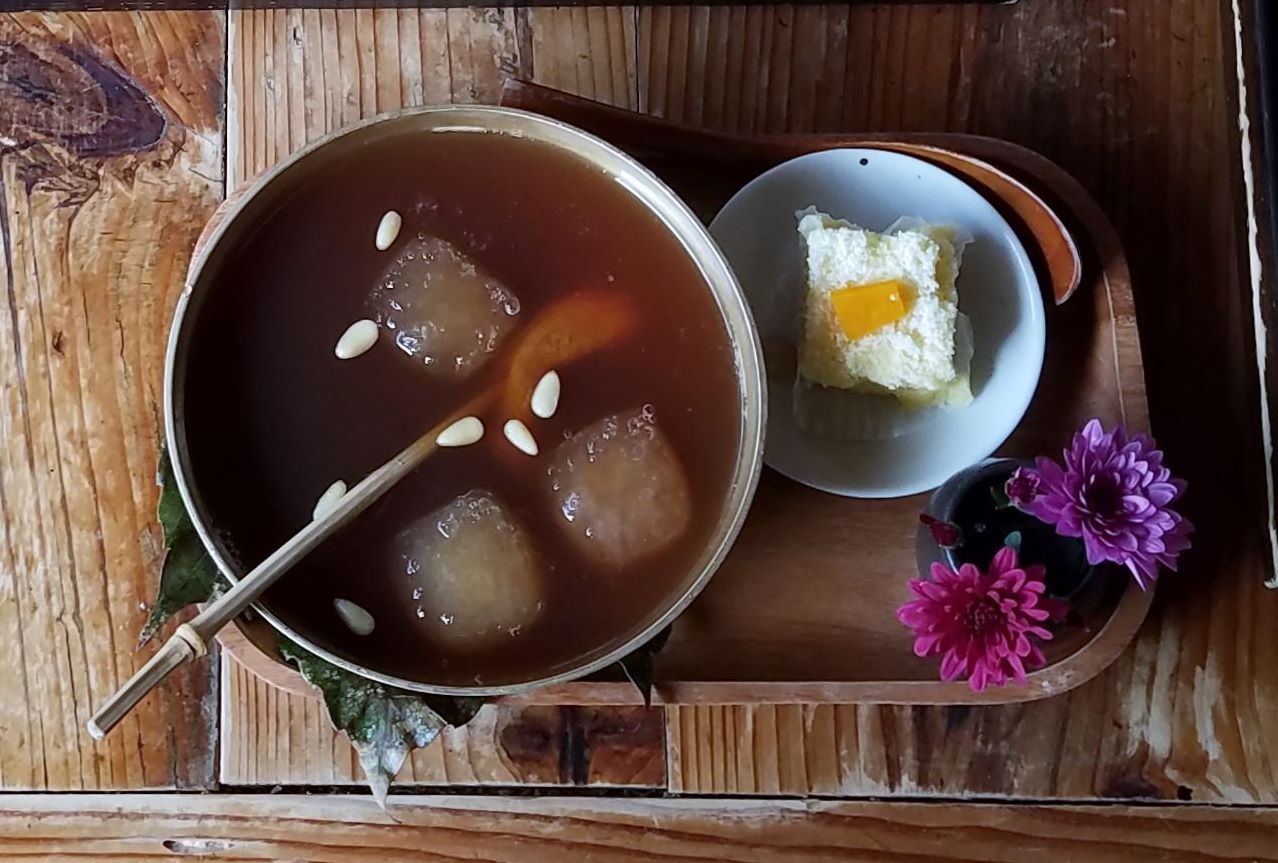 To give you further idea of what you may find in a Korean cafe or tea house, here are signs of teas and desserts displayed outside a cafe in Insadong, a popular neighborhood in the heart of Seoul that is often visited by locals and tourists wanting to experience traditional culture of Korea. 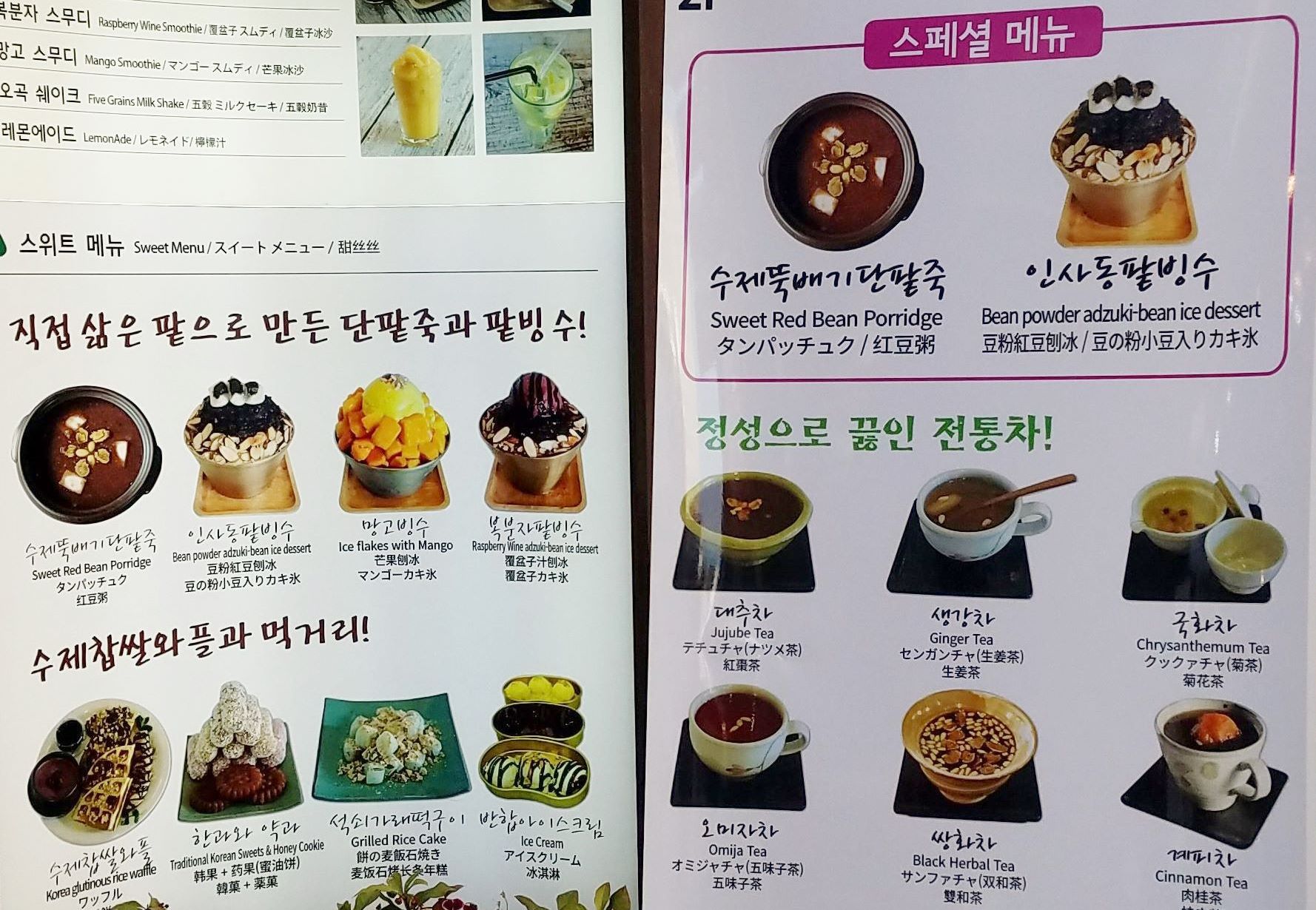 All photos were taken by Selina Law copyright 2019.